Iran is Just a Convenient Distraction

Iran this. Iran that.

Iran wants to be the next nuclear power on the block.

Iran has weaponized its Plutonium, (or Uranium, or whatever...)!

We have to have sanctions Iran!

Israel is pushing the U. S. to attack Iran.

The U. S. is trying to get Israel to do its dirty work by attacking Iran.

Even France is with us!

And some apparent backtracking for good measure...

@ASoldiersMother White House warns new sanctions could lead to war with Iran...yeah, and no sanctions will too...so Obama, what now? #IDIOT

With some supplementary chanting...

The oppress their ethnic and religious minorities!  ...so does Saudi Arabia

The oppress women!  ...so does Saudi Arabia, plus I know several lesbian separatists who would appreciate the women-only beach resort the Iranian government built.

They kill their homosexuals! ...and yet male-to-female transsexuals are somewhat accepted, and allowed to transition???

And then, the cries from the citizenry....

We must stop Iran! We must attack Iran!

We cannot attack Iran! The Iranian People are on "our side!" They want democracy! We cannot just go in and start bombing them!

Don't even make sanctions against Iran! It will just hurt the Iranian People,...who are on "our side!"

Esser Agaroth (2¢):
Um,...won't bombing Iran's nuclear facilities create an environmental disaster for everyone on the planet??

OK. So, let's a closer look at the situation, and see if we can't just figure out what's really going on.

I have absolutely no doubt that the Iranian government/Iranian religious leadership would like to see Israel wiped off of the face of the earth, and that have . (God Forbid!) ...or that they want nuclear weapons, etc.

I also have no doubt that Iran is not the easiest nor safest place to live.

Now, let's take an even closer look at the situation...


Iran is not the only threat to Israel. Hopefully, you already know about the "other" missiles, rockets, and what have you already being shot at us from Hamas in the south, and from Hezbollah in the north. Plus, the rule of thumb, learned from Israel's history of wars to stay alive is that when missiles and rockets are not being fired at us, the "cease fire" is being used to make more.

There are also missiles pointed at us from Syria, not to mention talk of chemical weapons, which may be real or not. The same chemical weapons, real or not, may actually have been smuggled in from Iraq in 2002-2003. The Syrian government is now under fire from various factions of its own constituents, including the stateless Kurds, who are simultaneously being knocked around by Turkey, Iraq, and Iran, in addition to Syria. And, of course, the Syrian government has already tried to blame Israel for its sorrows. Go figure...

Syria is definitely ripe for "external intervention," as "they" like to call invasions these days. But, who will do the invading? U. S. troops (ie. world police)? Russian troops providing assistance? NATO or UN "peace keepers?"

Then what? The troops come into Israel, and start kicking out "settlers" from Yehudah and Shomron (Judea and Samaria), because after all... 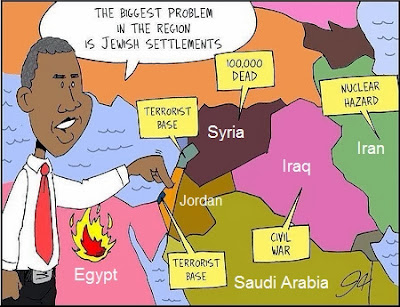 The Israeli government won't mind, if the West does its dirty work. It would save a helluva lot of time, energy, and money, no to mention the psychological trauma of a full-out civil war.

Iran is dangerous to Israel, as are Hamas, Hezbollah, and delusional Syria leaders. Plus, which Muslim country will be next to fall under the control of militant Islamists? Turkey? Jordan? Who's to say that Egypt won't give it another shot?

But, the sneaky liars in the West are just as dangerous. Everyone wants Jerusalem and the Temple Mount, and one way or another, everyone is going to try and get it (Zech. 12-14). The Erev Rav is already finding ways to sell it off, or even give it away.

Iran is just another convenient distraction.
Posted by Esser Agaroth at 11:54 PM