Banned From The JTF Forum!

The posting of What The Goyim Think About Jews on the Jewish Task Force [JTF] Discussion Forum got me banned from that forum.

Apparently, I hit a nerve, daring to point out how halachah (Jewish Law) does not necessarily match the apparently Christian-loving sentiment on that forum.

When an administrator posted to the string in question that I should refrain from post such divisive material, I respectfully replied with a query as to which part of the terms of use I had violated.

I agreed that the owner Chaim Ben-Pesah has every right to make whatever rules he wants on his forum, and that I should choose to follow them or leave.

I sent a personal message to Chaim as well, to which he has yet to respond. As a side note, I was being confused with another resident of K'far Tapu'ah with the same initials. I thought that was odd. So I mentioned to Chaim that I am, in fact, Ya'aqov Ben-Yehudah, a real person. I could not care less if anyone thought I was a real person or not. However, I did not like the tone being used by one of their beloved Christian participants against my friend with whom my identity was being confused.

Instead of receiving any reply to my query, the string was removed, and tonight, when I tried to log on to the JTF Forum, that I had been banned. 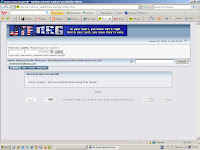 (Click image to enlarge and clarify)
Now, when I was banned from the Revava Forum (Don't get me wrong. I don't make a habit of going around, trying to get banned from discussion forums), I did not even receive a "you've been banned" message, let alone a warning from any of the forum's moderators. I simply tried to log-in one day, I could not.

My sources tell me that there was not even an entry regarding my having been banned in the forum's moderation log. It was as if I had never existed as a member.

The only "crime" which any of us could discern was that, even though I had never caused any trouble, I had primarily been posting announcements for a rival group's events and activities. Thus, I was apparently removed by the forum's owner, who could no longer tolerate such "insolence."

It's not completely shocking really. A lot of people actually like living in the "protective shadow" of the non-Jews.

If a Jew reserves his fear for Hashem, then there is no reason to appease Christians by making them feel warm and fuzzy.

Don't get me wrong, I appreciate Christian support of Israel--but as soon as their conversion agenda starts to show through, I always say "no thanks".

Protecting our souls is more important than their support. If we are willing to allow them to attempt to convert us in order to gain their love, then there is no reason to be Jewish.

It's nice to have friends, but we don't need them. We have a Covenant with Hashem that makes friendship for the sake of anything other than simply friendship a waste of time.

Hashem is our promised protector, and no amount of Christian friendship could ever replace that guarantee.

Not surprising at all. It's always been a x-tian love fest at JTF. Apparently they never heard of Esau. I guess it is silly to expect anything else from someone who was ga-ga for Ann Coulter not that long ago. Of course when it comes to un-Jewish hatred (like genuine racism based on skin color) the lunatics have plenty to say. Like Rabbi Kahane always said, those who can't debate defame. The tragedy is that they these misfits have the chutzpah to maintain that they represent the authentic teachings of the Rav (H"YD).

The support of gentiles for JTF does not mean that they are trying to convert Jews.
To suggest that a man like Chaim Ben Pesach is going to support any attempt to convert his followers is ridiculous to say the least.
There are gentiles even religious ones who sincerely believe that supporting Israel is the right thing to do.
Of course there are also the other kind as well who would take advantage and try to convert.
But I believe a man like Chaim Ben Pesach knows the difference.
With the unfortunate demise of the JDL , I believe his group is now the only one with a sufficient following to promote the ideas that Rabbi Kahane advocated.
All groups that feel this way should be trying to work together and not find excuses to attack each other.
The goyim are not our problem.
" I have seen the enemy and it is us"

Um,...who said anything about converting Jews?

If you're Jewish, my statement is backed up entirely by halacha.

If you're not, I could care less what you think.

My Internet filter won't let me bring up your blogger profile.