(JPost.com) Tristan Anderson, 38, of Oakland, California, was hit in the head by a tear gas canister during a protest against the West Bank security barrier in Nil'in on Friday and underwent surgery at the hospital, near Tel Aviv.

Anderson is on a respirator but in stable condition, the spokeswoman said on condition of anonymity because of the issue's sensitivity.

The protest took place in the West Bank town of Nil'in, near Ramallah, where Palestinians and international backers frequently gather to demonstrate against the security barrier. (Read more...)

No, I do not intend to shed any tears for this man's hutzpah and idiocy. However, I do hate that fence; it is evil. So, I have to thank the leftists for protesting and otherwise attacking it, albeit for the wrong reasons.

Not only that, but while these leftists are engaging in these protests, there are less of them available to come and harass us in Yehudah and Shomron (Judea and Samaria), uproot and burn our fields and vineyards, and incite the Arabs to doing even more violence than usual.

When such incidents occur on Fridays, it is particularly irritating as we are already occupied with preparing for Shabbath. So, thanks for being in Nil'in, far away from us, on Erev Shabbath.

Besides, fences don't really say "What's on THIS side is ours." Rather, they really say [to the Arabs, the EU, the US, and first and foremost to Israelis], "What's on the other side is NOT ours."

That's why the building of a fence around the town of Itamar, near Shchem (See Genesis 33:18), came to blows, and why towns such as Teq'oa (See 2 Samu'el 14:2) near Beth Lehem

This is not at all an insignificant message. Not only is it a powerful psychological one, but more importantly a religious and spiritual one.

When we build a fence in the middle of our Homeland, not so long after being able to retake it back from the Jordanian occupiers, a task we could only have accomplished with the help and permission of HaQadosh Baruch Hu (The Holy One, Blessed Be He), what message are we sending to Him?

Not the one of gratitude to which He is entitled.

Some would have you believe that the fence is good, because it "saves lives." However, that seems to be because some are using a galuthi (diaspora) logic, and not an halachic (Jewish legal) one. 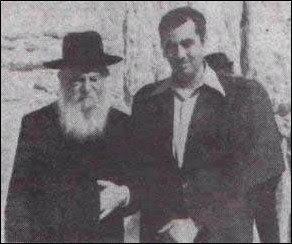 One must do everything to delay and to prevent the uprooting of Jewish strongholds.... One must practice self-sacrifice for their sake completely.

Yet, his students Rabbi Dov Lior (Hevron-Qiriyath Arba), Rabbi Zalman Melamed (Beth-El), and [I believe] Rabbi Moshe Tzuri'el (B'nei Braq) have continually had to remind us that "everything" means everything.

Building a fence, former Prime Minister Sharon's defacto border, he continually claimed was never to be a border, is the first step in throwing our God-given and re-given Homeland back in His face.

(May God forbid, and may He save us from ourselves)

And so, I would like to thank the Leftists for protesting that evil "security" fence, so that I can be "occupied" with other issues, not have a gas canister thrown at my head (at least not in Nil'in), and so that less of you are available to incite the Arabs to more violence than usual, and to destroy my neighbors' fields and vineyards.
Posted by Esser Agaroth at 9:01 PM

Amen! If the govt wants, it can fence in the Arab terrorists.

I don't guess he's in an Arab hospital???? No, no that would be too just and G-d knows there is no justice to be found in this upside down world. I hope at least that somebody is paying for his care besides the Israeli taxpayer. Oops. Too easy there, too. I'm sure we were the "agressors" in this case and so it is our "duty" to pay out. We'll probably even settle a few million on him before it's all said and done. G-d, I am so fed up with this lousy situation!!