After four years of serious stalking, I was finally successful in catching Jameel Rashid while hiding away in his secret lair, otherwise known as "The Muqata." 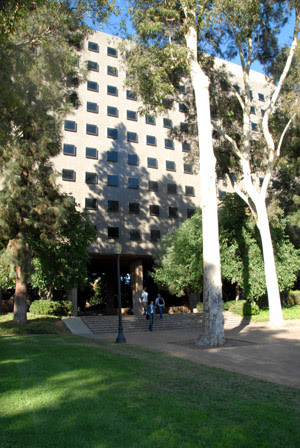 If you recall, this is not first time I have succeeded in discovering his secret lair. However, last time he just barely escaped my grasp.

Anyway, after investigating a series of clue Jameel was careless to leave around for me to find, I found it! I discovered his secret lair!

In the end, I was kicking myself for how totally obvious it turned out to be. If look carefully, you will that Jameel's secret lair looks just like a waffle!

I was so excited when all of the clues just, all of a sudden, fell together. Of course, my mission had not yet been completed. I had to enter his lair sleathfully, and catch him the act of whatever mischief he plotting and planning.

"Welcome, Ya'aqov Ben-Yehudah," Jameel calmly said, while relaxing in an armchair, fondling a martini. "I've been expecting you." Then he laughed in such a manner which would put Dr. Evil to shame.

Then, as I was distracted by Jameel's calm repose, Joe Settler jumped out from behind chartreuse sofa, and grabbed me. He had caught me off guard; there was nothing I could have done to escape his hold on me.

Joe forcefully pulled me to one of the walls, where giant ivy began sending out its tendril-like vines, entwining my arms and legs, until I was paralyzed from all movement, save for breathing and speaking.

I thought that I was in an episode of Batman, with Adam West and Burt Ward. I couldn't believe what was happening. Jameel's shenanigans obviously had to include mad scientist experiments on helpless plant life, hoping to find additional ways to carry out his evil plans.

Just then, Jack-Be-Nimble came out a secret revolving door, bearing a toy laser gun, and wearing a thoroughly offensive fluorescent yellow eye mask and multicolored, spandex, full body suit. (Why isn't the fashion police around when you really need them?)

I thought to myself, "Is this my punishment for being a Padres fan?"

Jameel stood up. "Just relax, Jack. You'll get your chance. But first let's see if Ya'aqov will be willing to provide us with certain pieces of information, in exchange for a less torturous execution. Ya'aqov.... Ya'aqov...."

Just then, I awoke from my daydream, to Jameel poking my arm. After a couple of years of discussing it, we had finally arranged to meet in real life. Jameel was on a lunch break. He had the fish. I had the soda water.

"I don't know, but it didn't sound very pleasant."

"It was your secret lair. I found it!"

"Impossible! My secret lair is un-findable."

"I'm sure it was your secret lair. It looks just like a waffle, doesn't it?"

*********
Note: Jameel and I really did meat for lunch. I know he'll kill me for ruin his reputation, but he really is a nice and intelligent guy....

I haven't met too many other bloggers. Apparently, their too busy being glued to their computer screens.

By the way, who can guess what famous building this is in the picture?
Posted by Esser Agaroth at 4:23 PM

If you come to the Blogger convention you'll meet other bloggers. It's that simple and you're in Jerusalem anyway...

Risa, do you mean to tell me that stalking is not a requirement for meeting bloggers? ;-}

If he didn't bring you a waffle you didn't meet the real guy.

He did bring me a waffle and tried to force it down my throat.

However, I was wear my "esophageal waffle strainer," thus he no chance.

BTW, please 'splain yourself regarding the mask and spandex. Do you have an "evil villain name?"