A commission of parliamentary faction leader headed by the knesset speaker on Monday approved holding a plenum hearing on Turkey's demand for an apology and compensation following the fatal navy raid on the Marmara ship last may. (Read more...)

In other words, the K'nesseth is having a change of heart, and may decide to give in to Turkey's demands for an apology over the whole "flotilla" incident," in which seven IDF soldiers were injured, due to having taken precautions not to harm the "civilians" on board.

In self-defense the IDF ended up killing nine of those on board, attempting to violate the Israeli blockade of Azza (Gaza). The blockade had been imposed to prevent arms reaching Hamas terrorists.

So, exactly how did the K'nesseth come to such a crossroads?

Were the members feeling guilty about the Turkish coming to our aid during the recent fire in the north? Or was that the just the catalyst?

The debate in the K'nesseth seems to be more about exactly WHERE to kiss Turkish tuchus, than anything else.

This image from South Park (IMHO, one of the greatest commentaries on American society), Season 11, Episode 1, "With Apologies To Jesse Jackson," in which Randy Marsh performs the same act on Jesse Jackson. 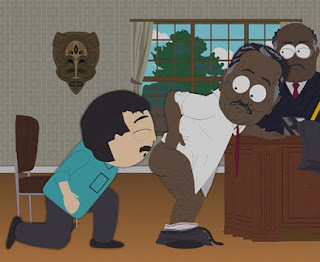 Yet, again, the Israeli Government is worried about whether one of the goyim will still be its "best friend," instead of looking within for validation and self-esteem, alla American elementary school.