The Jewish Unity Which Threatens The Left

Who was at the rally in Jerusalem last Thursday, in support of holding on to the entire Jewish Homeland? 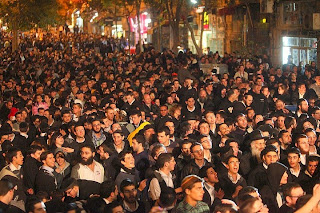 (Click On The Images To Enlarge)
I received these photos only tonight.

Granted there are plenty of Chabbadniks out there. But besides them, the rally is pretty "black," as they say. No? 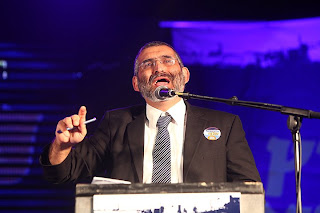 This may be news to you, but not to me.

This kind of Ahduth Yisra'el (Jewish Unity) has always been around in one shape or form.

Much of the Haredi leadership moans and groans one way about the "Tzi'enim" (Zionists), and waiting around for Mashi'ah to do all the work, and many of the Religious Zionist leaders are not to happy about their marching off to war, when others do not.

But, that is the leadership. The Jews in both camps, unsatisfied with answers to questions posed to their rabbis, are a completely different story.

How much of this kind of unity is out there? How much has it been growing over the years?

That is hard to say, due to the distorted media coverage over the years. It is also hard to say if that is changing, or if it is an illusion, or a put up job.

This is exactly the kind of unity that the Left does not want you to know about. It is one of the most frightening things occurring in their eyes. When they talk about "unity," what they really mean is either "unity" with what they believe or successful indoctrination into anti-Torah, secular Israeli society. Hmmm...I guess that's a redundant, isn't it.

Fortunately, sites like Rotter.net are out there to give us the scoop, as it were.

Throw in secular youth (e. g. Betar Jerusalem soccer fans), searching for answers as to why their government sends them off to wars it never finishes, gives more rights to Ethiopian and Ukrainian Christians than to them, and does not do anything to prevent Arab men from marrying Jewish women...

...and you have a massive amount of power, the Left simply does not want you to know about.

The Left is afraid,...very afraid.
Posted by Esser Agaroth at 10:20 PM

Leftists are slightly delusional. I am now in the process of reading David Horowitz's book, Radical Son, a Generational Odyssey. It is an autobiographical political story of how he went from rampant socialist/leftist to right-wing conservative.

What you wrote is very encouraging. Thank you for giving me more hope with your positive post on Jewish אחדות .