After getting remarried to ex-husband Rick Salomon, Hollywood star Pamela Anderson and Solomon were on a plane to honeymoon in Israel (Life In Israel). This is not Anderson's first time in Israel. She has been here before in 2010, to shoot an ad campaign, and in 2011 to be a judge on Israel's version of "Dancing With The Stars." (Times Of Israel).

Already there has been mocking of her attire. Even though the photos depicted here appear to be similar, if not identical to those taken of her in 2010 by Kobi Gideon/Flash90, I hope that she dresses the same at The Kotel (Western Wall) this year. the mocking is completely uncalled for.

Pamela Anderson is dressed more modestly than the "passed the shoulder" length sheitel (wig), tight bodes, mini-skirt look which is so popular these days with the women in a "certain" community, many of whom are native English speakers.

There! I wrote it! 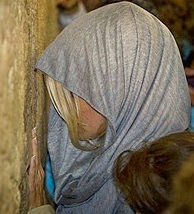 Before you start screaming that she is just pandering to Muslim sensibilities, remember that she is at The Kotel, not at a traditionally Muslim sit, and that she is dressed more modestly that many of the Muslim women of Jerusalem who cover their hair.

Even though I would not have chosen those colors for her, she somehow makes her stylist's poor work. Perhaps the blue-grey head covering was a last minute choice. For that I can forgive her.

Being a member of the radical, animal rights organization PETA is another story....

Especially as an entertainment professional used to wearing less than average amount of clothing at any given moment, Pamela Anderson should be applauded for her respect for the Holiness of this site, not denigrated.

I await your hate mail and comments.
Posted by Esser Agaroth at 2:26 PM

Hashem yerachem aleinu that this goyish lady... possibly the most famous woman alive in our generation when it comes to the subject of immorality is willing to express such femininity and modesty in respect to the Kotel while Jewish women wage war at the same site for the right to wear talit tefillin and sing like a bunch of men. Has any generation needed mashiach more than us?

Don't get me wrong. I'm not calling her a tzadeqth.

But, HaShem's messages can come from anywhere, no?

I don't know. But, she did the right thing.