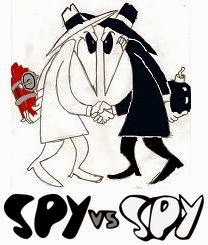 Well, it looks like we have a similar situation developing in Jerusalem.

The Women of the Wall have officially made it in the Jewish world - they now have a splinter group. a break-away minyan.

The new group, called O-WoW is upset that WoW has decided to negotiate a compromise with the government and accept an alternate location, one that has come to be known as the Azarat Yisrael. O-WoW will hold its first organized services at the Kotel this Friday. According to the article it will be marking Tu bShvat, though Tu bShvat is really on Thursday so i am not sure how that works.

I feel really bad for Ronit Peskin and Leah Aharoni, founders of Women for the Wall, who will now have to lose some focus as they fight two separate groups, and possibly no longer once a month. If the two groups decide on different monthly days for their services, Women for the Wall might have to bring out the masses on multiple days, which might not be as simple a task.

Then again, if they stay divided, and if it is true that most of the members of O-WoW live abroad in the USA, they might not have services all too frequently. They might not get a minyan, and they might go unopposed because of it.

Esser Agaroth (2¢):
Minyan? Let me be absolutely clear about this. They NEVER get a minyan., which is comprised of 10 kosher, Jewish men.

Well, I say, why don't we get Rabbi Avi Weiss, who appears to have received "Discommendation" from the Israeli Chief Rabbinate, to come over and referee?

Just look at the Kotel now!

Plus, there are many other examples of Frankenstein's Bride which you helped to create.

Posted by Esser Agaroth at 4:50 PM

Oh how I've missed the sea hags! I wrote a piece on these crazies- here it is...
http://www.breslev.co.il/articles/society/jewish_world/women_haters_of_the_wall.aspx?id=24577&language=english

Thanks for the link, Racheli!