The New Israel Fund: Back To Africa

YNET DEBATE: The African migrants and their defenders
Shaul Rosenfeld and Avi Dabush discuss the New Israel Fund's support for the tens of thousands of asylum seekers in the country, and what it means.
January 21, 2014

Writing Tuesday for Ynet, Shaul Rosenfeld says the New Israel Fund's support for the tens of thousands of Africans living in Israel is part of a greater plan to destroy the Jewish nature of the state:

"...once the protest increased and more and more demands were made to look into who is behind those "spontaneous" activities and who is funding them, it turned out that that same fund, which makes sure to note in its website that "the protests belong to the asylum seekers – they are the ones who initiate them, manage them, and lead them," took the trouble to provide spontaneous aid to execute the first march and fund the spontaneous transportation of the infiltrators to Rabin Square in the big protest held there. It also turned out that another association dependent on the NIF greatly helped the infiltrators march from the Holot facility to Beersheba.

Those human rights organizations, like the New Israel Fund, understand that only through tricks one can create a state of all citizens, and only through concealment one can succeed in neutering its Jewish character."
Read the rest here

In his rebuttal, NIF's Avi Dabush dismisses the accusations that the organization is trying to undermine the Jewish nature of the state, citing its broad range of activities and its wealth of Jewish support:

"For those who are still interested in the facts: The New Israel Fund supports hundreds of organizations a year, and its activity has been enjoyed by many, at different scopes, for decades: Ethiopian immigrants, Mizrahim, Russian speakers, Arabs, haredim, women, etc. The aid is given in a variety of issues: Environment, employment, the battle against racism, human rights, housing and planning, health, gender equality, shared society and more.

Those who are really and seriously interested in knowing where every shekel goes to are invited to visit the NIF website and read its reports, which have received praise and prizes from the US associations registrar. And where is the money from? From American Jews who love Israel. Yes, just like the Jewish Agency or KKL, the federations which donate to every city and council we live in, as well as the Joint. Jews who wish to support trends of love of man, mutual guarantee, narrowing gaps and building an exemplary society, in the vision of the Proclamation of Independence. It's that simple."
Read the rest here

What do you think about the issue at hand? Let us know in the comments below.

In my not so humble opinion, both arguments presented do the same thing. The argument against the New Israel Fund [NIF] successfully exposes its shenanigans, but so does the supposedly "supportive" argument.

2. "The aid is given in a variety of issues: Environment, employment, the battle against racism, human rights, housing and planning, health, gender equality, shared society and more."

3. "Yes, just like the Jewish Agency or KKL (Jewish National Fund), the federations which donate to every city and council we live in, as well as the Joint."


"Against racism," "human rights," "gender equality," and "shared society" are all code phrases for anti-Torah. Of course, the Torah supports all of the above, within a Torah (ie. authentically Jewish) framework.

Leftist Jews are so assimilated into Western culture, they are deeply confused about basic concepts such as right and wrong.

"Just like the..." does not do it for me either, and makes the argument even stronger that the NIF is, in fact, attempting to transform Israel, according to its own un-Jewish vision, much like the non-Jewish Agency, non-Jewish National Fund, and the Federations.

Is the New Israel Fund the...

Surely, it is technically both. But the focus is clearly on the building of a New Israel,...a Western assimilated one.

If the NIF wants to help African infiltrators, it should rename itself the NAF: New Africa Fund, and open up a branch in Africa. This way those same initials can also be used for its original, true name: New Arab Fund. 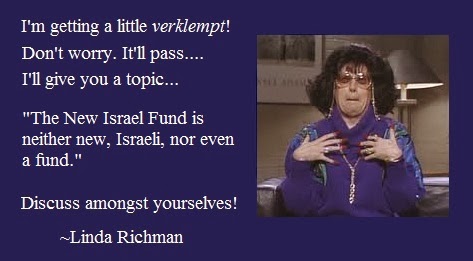 The picture looks scary !
I cannot believe that the Africans finally made it until Kikar Rabin.

At first, they only mingled around the Central Bus Station. Then they started creeping around the beaches. Collecting plastic bottles or stealing money and phones from tourists. Now you even see them at Dizengoff.

In addition to that they have become part of the homeless tent demonstration at the Arlozorov train station. The demonstration as well as the Africans are being funded by New Israel Fund branches such as Shatil.

Thanks for the tip on "Shatil."

I had yet to look into specific organizations.

The leftist Shatil organization is involved in everything. It is them providing demonstrators with tents and supplies.

In the past they did so with Vicky Knafo and the Kikar HaLechem protest.