It's Broken Record Time! Arabs Want to Annihilate Us!

YNET: PLO official: Abbas' successor could return to armed resistance
Should peace talks fail, next Fatah leader could 'give up and return to the old way,' official says, speculating Abbas' future successor could be outsider or person currently jailed in Israel.
February 27, 2014

A senior official within the Fatah movement warned that the next Palestinian leader might return to violent resistance should peace talks fail, Israel Radio reported.

"It is not detached from reality," the official said regarding the possibility that the yet unknown political heir to Palestinian President Mahmoud Abbas will choose to return to an armed struggle should a peaceful solution failed to be reached.

"If diplomatic negotiations will no bare fruit, and there will be no hope or prospect, it is possible Fatah will give up and return to its old ways," the senior official told Israel Radio. (cont.) 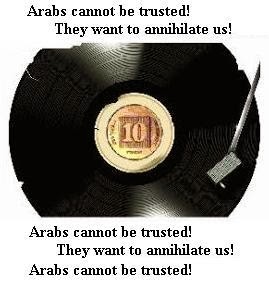 Yet, I have still not nearly as broken as the Israeli and exiled Jewish "Sheeple," some of whom refuse to wake up, and some of whom are brainwashed pawns of the Erev Rav, carrying out its evil plans to destroy the Jewish People through assimilation into Western culture, and by other means, destroy any vestiges of Jewishness of the Land of Israel, and anything and everything else truly related to Torah.

I am sure that is just too much for you to be able to absorb all at once. So, I will hock you over one issue at a time.

Arab cannot be trusted! They want to annihilate us!

I will have to get into your face another time about the dangers of the un-Jews.

You are simply not ready for it.
Posted by Esser Agaroth at 2:47 PM