It's Broken Record Time: New York is not Your Home; Israel Is!

So, yet another North American Jew, even another frum (Orthodox) Jew has made the "big time," being elected to state office. In the case of New York State Sen. Simcha Felder (D-17th-Kings County*), he has been in office for 13 months and a few days.

You can read all the details, including the controversies, of his political career on his Wikipedia page.

In the meantime, let's check out what the good State Senator had to say on the floor....

OK. So, he talked about a proposed Senate Resolution honor a Jew man Rabbi Michoel Ber Weissmandl who spent much of his life rescuing Jews people from their ultimate demise during the Holocaust.

Did you pick up on the politically-correct manner in which he expressed his thoughts and feeling regarding this issue? (SIGH)

The manner in which he went about speaking on this proposal for a resolution was not wrong, per se. the fact that he is in a position where he follow such rules of politically-correct etiquette is. 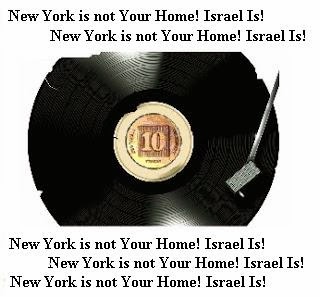 So, I must add NY State Sen. Simcha Felder to the ever growing list of Jewish politicians, investing way too much time and energy for the sake of galuth (their lands of exile).

With all of the guff I give to Rabbi MK Dov Lipman (Yesh Atid), at least I can say that he is living in the only true Homeland of the Jewish People, and that his time and energies are more highly invested in the right direction, for the sake of Am Yisra'el.

Rb. Lipman and I may disagree (often). Nevertheless, he is here in Eretz Yisra'el; Sen. Felder is not.

Wanna wait around for Mashi'ah? That's fine (Well, it's not actually fine, but...), then at least invest your time and energy more directly in your own People.

*The 17th NY Senatorial District is comprised of the Brooklyn neighborhoods of Borough Park, Midwood, Brooklyn Chinatown and parts of Bensonhurst and Gravesend
Posted by Esser Agaroth at 5:38 PM