Will settlers be given the opportunity to fend for themselves, living within yet another Arab, terrorist state?

Are they simply being set up to be massacred?

Israelis and Jews have already been mulling over these questions, and more. At least I hope that they have been awoken from being "Sheeple" being led around, and possibly to slaughter (May God Forbid!).

What I would like point here, in this post is the bizarre reaction from one of Israel's, prominent, "Religious Zionist" rabbisץ


Arutz 7: Rabbi’s Shock at PM’s Proposal: ‘Have We Lost Our Senses?’
Rabbi Chaim Druckman appalled at Netanyahu’s suggestion that Israel give historic heartland to PA, leave ‘settlers’ where they are. 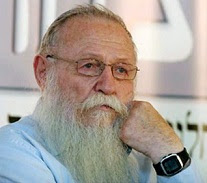 Rabbi Chaim Druckman (left), head of the network of Bnei Akiva yeshivas, had harsh words Thursday for Prime Minister Binyamin Netanyahu’s recent suggestion that Israel concede most of Judea and Samaria (Shomron) to the Palestinian Authority.

According to a leak from senior sources in his bureau, Netanyahu suggested that the numerous Israeli citizens currently living in Judea and Samaria could be allowed to stay where they are, but as citizens of a new Arab state, rather than be forcibly expelled from their homes by Israel.

Speaking in advance of a planned prayer rally at the Kotel (Western Wall), Rabbi Druckman said, “I don’t believe my ears. Who is it they want to give parts of our land to?

“One does not give one’s homeland even to friends, let alone to mortal enemies,” he told IDF Radio (Galei Tzahal).

International pressure on Israel is not a reason to make dangerous concessions, he continued. “The nation of Israel is a stiff-necked people, we have survived for thousands of years despite everything,” he argued.

“We’ve lost our senses,” he lamented.

Rabbi Druckman said he does not oppose the creation of a state of “Palestine” – as long as it is not in Israel’s heartland. “I support creating 100 states for 100 peoples, just not in Israel. The land of Israel is the land of the people of Israel,” he said.

“I am completely against any agreement like this,” he continued. “We will not give any part of our land to foreign rule. No normal nation would do such a thing.” (cont.)

Esser Agaroth (2¢):
In a nutshell, this is what I think of Rabbi Druckman's so-called "shock."


Previously, I could not make heads or tails of Rabbi Druckman's position regarding whether IDF soldiers should refuse to carry out orders which contravene halakhah (Torah ie. Jewish Law), wavering back and forth between admonishing acts of insubordination versus soldiers being pushed into a corner, and thus having no choice. No choice to do what??

Rabbi Druckman seems to clarify his position by repeating that notoriously ridiculous mamlakhti (un-dying State loyalist) drivel that "Jewish law and military commands do not contradict each other," and has also told residents of Jewish strongholds to go along with the removal of housing structures from their communities.

I will not even get into Rabbi Druckman's employment of a known sexual predator as a teacher in his own Yeshivath Or Etzion, near the city of Qiryath Malachi.

Needless to say, we should all hold Rabbi Druckman to his current words, a lot of that will do in the middle of being thrown out of our homes, and off of our lands.
Posted by Esser Agaroth at 1:09 PM